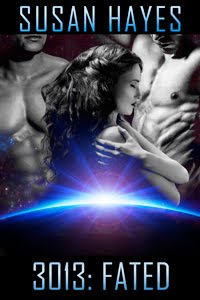 Rebel medic Ciara Fanning has called the badlands home for more than a decade. Raised in the Alliance, she spent the first half of her life defined by what she wasn’t—fertile, valued, deserving of her family’s love. Now, she lives beyond the Alliance’s reach and defines her worth by the lives she’s saved and the people she’s healed.

Alliance Elites Dr. Vance Sterling and Dane Foster live for the joys of raising their daughter, Annie. It’s been more than two years since they buried Annie’s mother,  but neither man has been ready to move on… until they meet a redheaded rebel with no place to stay and a heart as battered as their own.

Dane and Vance have dedicated their lives to defending the Alliance way of life while Ciara has dedicated hers to helping those who live outside Alliance lands. Can they heal old wounds and forge a new life together, or will the dark ghosts of the past steal their future before it’s even begun?

They were a third of the way there. Ciara Fanning knew if she could manage to stay conscious, they’d all likely live to see another day. She had to get her two young patients to the base at . It was their only chance. Judging by the blood she’d started coughing up a while ago, it might be her only chance, too.

She tightened her hands on the steering wheel and forced herself to focus on the road instead of the pain that came with every labored breath she took. She knew what the problem was. One of her broken ribs had pierced her lung, and the injury was being aggravated by every bump and pothole
.
She’d called the badlands home for more than ten years now, walking away from her upbringing. She hadn’t done it for political reasons or need for adventure. She’d wound up here through a series of events and had discovered she could make a difference out here, so she’d stayed. Plus, it put plenty of distance between her and her family. That was a definite perk. Growing up as an infertile female in her family had been hard enough, but Ciara had never been able to match the accomplishments of her older siblings. Her brothers were elites, and her sister was a fertile scroll, living a life of luxury as the chosen of two affluent elites with powerful families.

Her tenth birthday had come with great expectations and fanfare, and ended with her family’s bitter disappointment. Like every other child in the , she was tested for fertility at age ten, but unlike her siblings, there was no celebration at the end of the day. The freshly applied star tattoo by her right eye announced her shame to the world. She was infertile. Her family had never forgiven her. Instead, they’d done their best to forget she existed at all. Eventually, not even that had been enough. As far as Ciara was concerned, her life truly started the day she’d left home.

Another bump in the road made her wince, forcing her mind back from its wanderings to focus on the immediate problem of staying alive. If the earthquake hadn’t destroyed her clinic, she’d have been able to stabilize them before they had to travel. If most of the inhabitants hadn’t been out trading goods and services at the monthly market a half day’s journey away, there’d have been someone else around to drive. If she’d been wearing her stars-be-damned wrist unit, she could have summoned help. If. If. If. If wishes were rockets, then beggars would fly. None of those things had happened, so she was going to have to make it to the base on her own.

There was a low, agonized moan from the backseat of the transpo, and she glanced into the rearview mirror to check on her patients. Danny was still unconscious, but his little brother, Kyle, had been drifting in and out of awareness since she’d found him pinned beneath the rubble of what had once been their home. Their father was trading wares at the market. Their mother had given up her life to protect her sons, shielding them from the worst of the collapse with her own body. Neither boy was aware of their loss, not yet. And if she didn’t get them to the base’s medical center soon, their father might be mourning them as well. She gripped the steering wheel tighter and pushed the ancient transpo to its limits.

She was running out of time.

Time passed in flickering jumps as the miles ticked by. There were flashes of awareness followed by blank stretches where she operated by will and instinct alone. Then she saw it, a plume of dust on the road ahead of her. Someone else was out here, and they were coming from the direction of .

Minutes later, she saw the source of the dust, and she breathed a sigh of relief. They were personnel and better yet, one of the vehicles was marked with the red cross that meant medical help. They must have detected the earthquake and come to assist. She managed to stay conscious long enough to pull over to the side of the road as the others arrived. She finally let herself pass out, escaping the pain that had dogged her every second since she’d dragged herself out of the wreckage of her clinic. Her last thoughts were for the two boys she’d pulled out of the rubble. She hoped they made it.