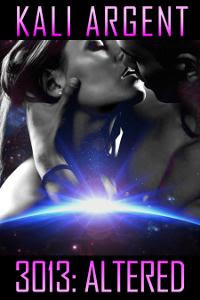 Commander Ivy Dalton doesn’t believe in luck or chance. Everything in her life—her career, her ship, the respect of her peers—she’s worked hard to earn. When she and her crew are attacked during an exploration mission, sending her ship crashing onto an unidentified planet, her only concern is finding a way to contact the . She never expected a single, tiny incident in the infinite reaches of space to challenge all she thought she knew about fate, destiny, and…love.

For thousands of years, King Kai Blackthorn has ruled over the people of his planet with selflessness and compassion, never taking anything for himself. Recently, however, he’s grown weary, malcontent, and the loneliness that has plagued him for centuries has become too pronounced to ignore. Then all that changes with the unexpected arrival of one sassy blonde with luscious curves and a dangerously sharp tongue.

Caught in the midst of intolerance and corruption, two strangers from different worlds struggle to find a way to coexist. Kai can’t abandon his people, and Ivy can’t imagine a life grounded in one place. But fate will not be ignored. Decisions must be made, compromises that will change the course of their lives. For no matter which destination they choose, the journey will leave them forever altered.

Her hostile stance eased marginally, and her mouth softened at the corners. “That,” she said, pointed to the translator, “is a language converter? It’ll allow me to understand you?”

Pleased, Kai smiled as he offered her the blinking strip of gold-plated metal. At the same time, he carefully removed his own translator, paused, and slid it back onto his earlobe, demonstrating to her how to wear it.

After a long, tense hesitation, Ivy shuffled around the chair with her arm outstretched, allowing Kai to drop the translator into her waiting hand. She didn’t affix it immediately, but studied the device for several long seconds.

“It looks like a staple,” she murmured. “Are you sure it works?”

Kai couldn’t help but laugh as he nodded his affirmation.

“Okay, here goes nothing.” Brushing a stray lock of golden hair back from face, she slid the translator onto her lobe, just as he’d shown her. “Well,” she said after a moment, “say something.”

“What would you have me say, my lady?”

“Oh.” Her full lips parted with a silent gasp, and her emerald eyes sparkled like the waters of the ocean. “Say something else.”

“Welcome, Commander Ivy Dalton, to the high city of Sommervail.”

A sharp pain rippled through his chest and down his abdomen, stealing his breath with its intensity. His legs began to shake, his pulse raced dangerously, and heat swept over his skin. All at once, he felt dizzy, unsteady on his feet, and shadows blotted the edges of his vision.

“Merely the excitement of the day.” He needed to get away from her before he did something humiliating, like faint at her feet. “I apologize.” Gripping the doorframe when the dizziness threatened to overwhelm him, he squeezed until his knuckles turned white. “We’ll speak again in the morning.”

“Wait, I have questions. You can’t just keep me here like this.”

“The captain will answer any inquiries you may have.” As if summoned, Tira appeared at his side. “Tira, I’ll leave it to your discretion.” He tried to smile, but by the females’ worried expressions, he imagined he’d failed miserably. “Until our next meeting.” He lowered his head slightly toward Ivy. “Rest well, my lady.”

Retreating, he staggered down the stairs, leaning heavily on the railing, and stumbled through the corridors until he reached his chambers. It troubled him to leave Ivy after such a short meeting, but with his stomach churning and his head pounding, he could barely undress before collapsing onto his bed.

The silky gray sheets felt cool against his overheated skin, and the soft mattress cradled his aching body. Every muscle, tendon, and joint pained him. Even his hair follicles hurt. Stars above, he didn’t know what had come over him, but a part of him felt death would be preferable to such suffering.

Illness didn’t plague the inhabitants of Xenthian. Not once in over four thousand years had Kai experienced even something as minor as a sniffle. In the back of his mind, the part still fighting against what he already knew, he wondered if Ivy had somehow bewitched him. Burying his face into the pillow with a groan, he dismissed the notion as quickly as it came.

He was lying to himself, had been from the moment he’d walked into Ivy’s room. Upon seeing her, he’d felt the pull, the unshakeable desire to be near her. His entire being swayed toward the beauty, something inside him shifting to make room for this magnificent being he’d never even considered existed.

Kai wanted her. Not for a day, a night, or even a hundred years. He wanted eternity with her. His heart had recognized what his mind had not, and his body had taken it upon itself to respond in the ways of their kind.

Being in Ivy’s presence had been like standing in the eye of a great storm, both beautiful and terrifying in the way she consumed him.